Is a Figure Competition for YOU?

I’ve had a busy day so far at work and I am finally able to sit down.  We had a candidate interview today (for my job), which went really well.  I hope it works out, she would be a great addition to the staff.

I’ve yet to get back into my regular workout routine, which is just fine with me.  Life happens 🙂  Tomorrow I do hope to hit the weights though.

Today I did manage some exercise though, which was a 2 mile walk with my pups and I also participated in the candidate’s 30-minute group exercise demo, which was really good.  She did a combination of step aerobics drills and weights.  Now onto today’s topic…

Is a Figure Competition for YOU? 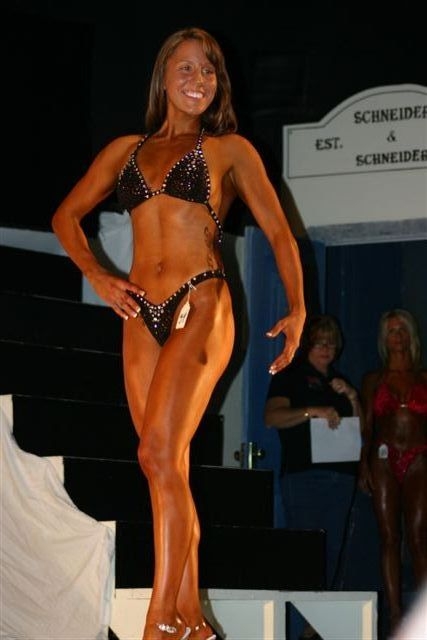 Today I wanted to talk about figure competitions.  I’m going to talk a bit about my background and why I quit my prep half way though.  I’ll also talk about what it takes in terms of diet and exercise to get in that kind of shape.

When I was 20 years old I was really into reading about figure competitors and wanted to do a competition so bad.  However, I knew that at that age it was not for me as I did not want to give up my freedom at college in terms of what I ate (and drank!). I’m glad I decided against that lifestyle at that point because it would have definitely hindered my college experience in a negative way.

When I went on to graduate school I thought that would be a better time for me to compete.  I rarely partied and I was out of my sorority house and was able to cook on my own.

I decided to hire a coach, who would communicate with me through email and phone (she lived in another state).  She sent me weekly workouts and my diet. It seemed easy enough to just follow everything exactly and I would get to the end result.

It actually was easy at first. I ate what I was told and did the workouts she made for me, no questions asked.  I had never dieted before EVER.   I have always just “ate”, plain and simple.  I never let food become complicated.

But surprisingly with my lack of dieting knowledge, I was able to follow the diet very easily and I weighed and measured everything to a “t”.

At first I was allowed one cheat meal per week, which I took on the weekend.  But after 2 weeks my weight did not budge, so my coach nixed the cheats. That was rough, as I ate the same plain food day in and day out.  However, that was the magic bullet- my weight started to drop a good 2lbs each week.  I was always very excited to step on the scale to see a smaller number.  It was confirmation my efforts were paying off.

As the weeks went on things got tougher, as expected.  My attitude towards food began to shift. I remember I was doing an internship at this time at a hospital in cardiac rehab.  One day we went to a presentation and lunch was given to us for free.  I of course could not eat it and brought my own food.  Obviously, that looks odd and I got a ton of questions. I became almost angered that people questioned my food choices, which is very unlike me.  I almost snapped at others and even judged THEM for wanting to eat the potato chips and sandwich (which is what I really wanted, not my chicken and green beans!).

I also became very protective of my food. I relate this feeling to a dog, who is guarding their dog bowl and growling – it was strange how I had this intense love of my food all of a sudden and I would get angered if someone God forbid ate one of my strawberries or a piece of my chicken.  I am not like this in my ‘normal’ state of mind, and openly share my food!

I also began to dream about food like peanut butter, cupcakes, and other goodies.  All I could think about was food, food, food!  I remember being on the treadmill and literally day dreaming of tasting peanut butter.  It sounds crazy doesn’t it?

Aside from food fixations, I was exhausted all of the time. I was moody and irritable too.  I ended up quitting after 6-weeks, which led me to an even unhealthier state of mind because I experienced what is called the “rebound” effect of dieting.

My body wanted food so badly and boy did I eat.  At first, it felt good to eat.  But it got to the point where I was binge eating every day and still felt hungry!  My blood sugar was also going crazy and I would have extreme dips which would cause me to get the shakes.

It took me about 6-weeks to gain the weight I lost (which was not much, about 8lbs) and the binging to stop.  I also stopped obsessing about food and daydreaming of it.  My blood sugar no longer went crazy either.

So why the heck do some people choose to compete if it feels like complete hell? Well, I think others ENJOY that process.  It’s tough and I believe some people like to be challenged to that level, both physically and mentally.  And I bet it feels pretty damn good to be on stage showing off your hard, lean body.

However, it is not the sport for me nor do I see myself ever attempting to do it again.  I’d much rather have a physical goal that doesn’t have to do with what I look like, such as a race.

What it takes to compete:

The steps it takes to get into contest shape is hard – you have to be willing to be 100% dedicated to your workouts (both cardio and weight training) and your diet.  You have to be willing to weigh and measure EVERY morsel of food that goes into your mouth.  And that got old real quick with me, but I did it (note: measuring condiments is a major pain in my ass!)

You also have to be willing to shell out a lot of money. If you hire a prep coach, that is going to cost you big time.  You also have to buy a special suit, which are way over priced (usually over $100) and special shoes.  The food shopping was not cheap either.  At one point I was buying 90 eggs each week and a boat load of supplements from bodybuilding.com 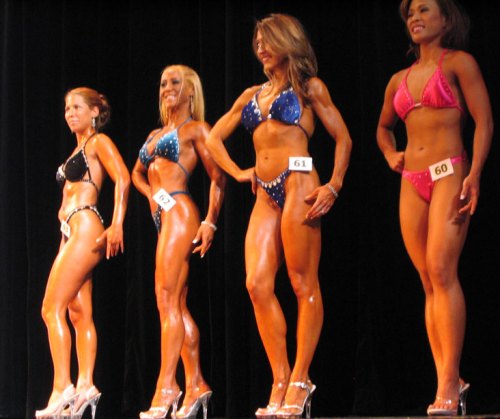 When I was 20 years old, I had no idea the amount of hard work it took to look like a figure competitor.  I thought all I had to do was a few more crunches at the gym and up my protein intake.  But the truth is that it takes a LOT of hard work. It’s a lot more than working out and eating “clean”.  You have to be extremely meticulous with what goes into your mouth.

It’s unrealistic to think you can stay that lean all of the time.  Sure, some people DO stay that lean for their job, but the majority of people do not look like that, nor is it the healthiest way to live.  From what I have seen online on various websites, most competitor’s weights vary a good 15-20lbs during the off season vs. competition season.  Some may vary even more, depending on how loose they are with their diets in the off season.

I am not sure I ever want to see myself at my leanest or having the “perfect” body because it’s not maintainable. I’m ok with having imperfections.

Over time, I have began to appreciate my body and how it looks every day not what I wish it looked like. I want to have a body that looks good every day (to me), which is how I feel right now, at my current body weight and size.  I have curves, I’m strong, and I am in shape.  It works for me and is maintainable for my life.   There is no mental struggle going on inside me about food.

I know I am partial to not doing competitions, but I do think that some people are able to have some sort of balance with the sport, and I applaud those who have a passion for it and do it in a somewhat healthful manor.

If you are interested in doing a competition, please DO YOU RESEARCH.  There is so much to learn and a lot of bad information out there, so I can’t stress that enough.

If you are looking for a coach, make sure to ask for references and really ask them questions regarding their diet and fitness philosophy.  As with anything, there are good ways to do things and there are really bad ways to do something.

Unfortunately, there are a lot of coaches out there who do things the bad way.  I personally do not have any recommendations for a coach.  I have not read about nor met anyone that I really agree with.  I am actually all for doing your own meal and training plans (if you are knowledgeable in this area) like my friend Tina did.

Have you ever competed? Did you enjoy it?

If you have not competed, have you thought about it?

This entry was posted in Body Image, Figure Competition. Bookmark the permalink.

39 responses to “Is a Figure Competition for YOU?”